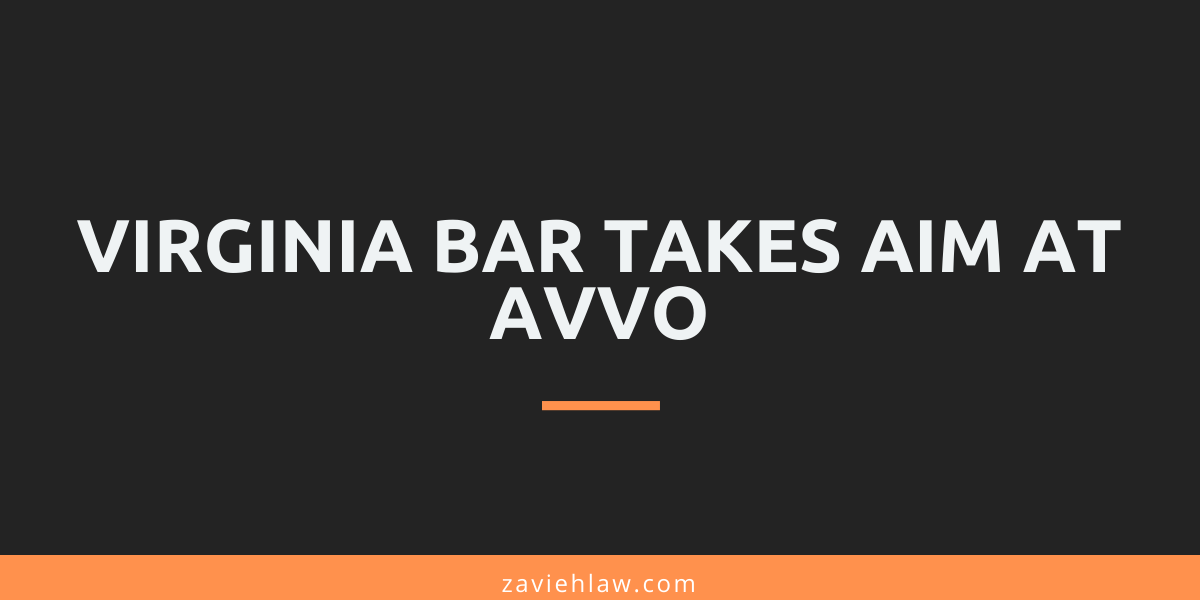 This post was written by Megan Zavieh and originally published on Lawyerist.com on October 31, 2017.

On Friday, October 27, 2017, Virginia Bar’s Standing Committee on Legal Ethics voted to send Legal Ethics Opinion 1885 to the Supreme Court for Adoption. LEO 1885 addresses third-party platforms offering legal services on a flat fee basis. While it could easily be read as “Avvo has been shot down in Virginia,” the opinion highlights a relatively small flaw in the business model and a map toward partial acceptance of those types of services. Still, it blocks those services from operating in Virginia, thwarts a type of legal service that the public has broadly accepted, and forecloses an avenue available to bridge the access-to-justice gap.

LEO 1885 does not identify Avvo by name. Avvo is well aware that the model described in the opinion closely resembles a business unit of Avvo, but the opinion is not limited to Avvo nor does it provide an entirely accurate depiction of how Avvo runs its service. Thus, although it is easy to read the opinion and think only of Avvo, this is a more general opinion that has the potential to impact multiple companies offering or considering offering a third-party platform for delivery of legal services.

The opinion describes a business model it calls an “attorney-client matching service” (ACMS), which it describes as a for-profit entity that provides an online platform for matching attorneys and clients. An ACMS gives a client a limited scope fee agreement, and the client pays the full fee to the ACMS. The lawyer does not negotiate the scope of services or the fee, nor does the attorney receive any of the client’s money until the services have been performed. The lawyer agrees to provide flat fee legal services under ACMS’s terms. When the matter has been completed, the attorney receives the full amount of the legal fee paid by the client. Then, ACMS auto-debits the attorney’s account for a “marketing fee” which varies based on the amount of the legal fee received.

Related: Fee Agreements for a Small Law Firm: What Lawyers Need to Know

Virginia laid out its objections to the model while also offering some solutions. On the issue of the lawyer ceding control over the fee and scope of the representation, it stopped short of saying that a lawyer is prohibited from participating in an ACMS. Instead, it concluded that a lawyer could participate so long as, before accepting a matter, the lawyer consults with the client and is satisfied that the services can be performed competently and in compliance with the ethical rules. Also, the lawyer must also exercise independent professional judgment and assure themselves that the fee is reasonable under the rules.

Virginia’s opinion that these issues do not entirely prohibit a lawyer’s participation in an Avvo-like platform provides something of a guide to move forward with delivering legal services in a modern manner. With some tweaks to an ACMS platform, Virginia’s concerns on these issues could be addressed. For example, if the lawyer needs to exercise independent professional judgment over the amount of the fee and also must consult with the client regarding the services needed, an initial phone call between lawyer and client before the client’s payment could resolve these concerns. Avvo’s model could be modified so that before the client can purchase services on the platform, an intake call between lawyer and client must take place.

In fact, the way Virginia identified the issues presupposes the solutions. The lawyer and client must agree on the scope of representation. This can be done within a platform like Avvo. The lawyer must be sure that the description of legal services is complete and accurate. This can also be done. The fees must be reasonable and not excessive compared to the competition. The marketplace will help guard against this problem in the first place, and the lawyer having the obligation not to accept unreasonable fees provides an additional layer of protection.

Though it provided steps forward on the attorney-client relationship front, LEO 1885 does nothing to resolve the ongoing ethical struggle over payment of fees in ACMS platforms. If there is one single issue that holds up the evolution of the legal industry in the modern world, it has to be the handling of client money and legal fees.

Trust accounting rules are in place to protect the client, and while it is indeed an essential goal of the profession to prevent the misappropriation of client funds, the rules hold up the evolution of legal services. Virginia concluded multiple problems exist when a client pays a fee to a third-party ACMS at the outset of the matter. First, unearned fees are to remain in trust. As an ACMS is not a law firm, it cannot have an IOLTA or hold client fees in trust. Second, since the fees are not provided to the lawyer, the lawyer cannot hold the funds in trust as required. Third, lawyers have an obligation under the rules to refund unearned fees at the conclusion of the matter. Even in in a flat fee case, it is theoretically possible for fees to remain unearned at the conclusion of the matter, and thus the lawyer would need to return them but has no access to them. Virginia offered no solution to this particular problem. It seems entirely possible that fees could be transferred into the lawyer’s trust account at the outset of a matter, but the fact that they pass through the third-party platform is likely to be a problem on its own. The idea of paying at the conclusion of the matter is not likely to be accepted within the industry of third-party platforms, so some other solution remains needed.

One solution not considered by Virginia in LEO 1885 would be modification to the rules to account for the modern way of doing business and the participation of third-party non-law firm entities.

From the advent of third-party platforms like Avvo (including UpCounsel and others), one big issue has been how to pay the service without implicating fee splitting rules. Virginia explicitly held that the substance of the arrangement trumps its form.  When a lawyer pays the platform and the amount paid has any relation to the amount of the legal fee, the payment constitutes unethical fee sharing.

Virginia’s key consideration was that the amount of the lawyer’s marketing fee was tied to the amount of the legal fees they earned from the client through the platform, and that correlation makes it fee-splitting. However, the opinion leaves open the possibility that fee splitting can be avoided by tying the lawyer’s fee to the number of clients they receive through the platform or the number of inquiries or clicks on their profile. Here, again, Virginia provided somewhat of a road map to solve this issue.

As innovators work to revamp the legal industry and bring consumers a more modern approach to the delivery of legal services, the most significant hurdle remains the handling of client funds. If the trust accounting piece of this can be addressed within the profession, it would open the door to the industry meeting public demand for better access to legal services. However, this change is going to have to come from a revamp of the rules, not from the ethics committees of the states.

Ultimately, the industry stands in its own way. As Avvo noted in its public comments, application of the ethics rules to preclude operation of a third-party platform is akin to regulating that all Virginia ham be sold with an extra layer of sugar, even if the consumer prefers ham with less sugar. The public is benefited by a service that regulators prohibit in the name of protecting the consumer. At least Virginia began to address some of the roadblocks and offer solutions to them under the current regime. As for the rest of the hurdles, rule changes seem inescapable if we are going to move forward.