In the Courtroom, Personal Political Views Must Take a Backseat to Client Interests 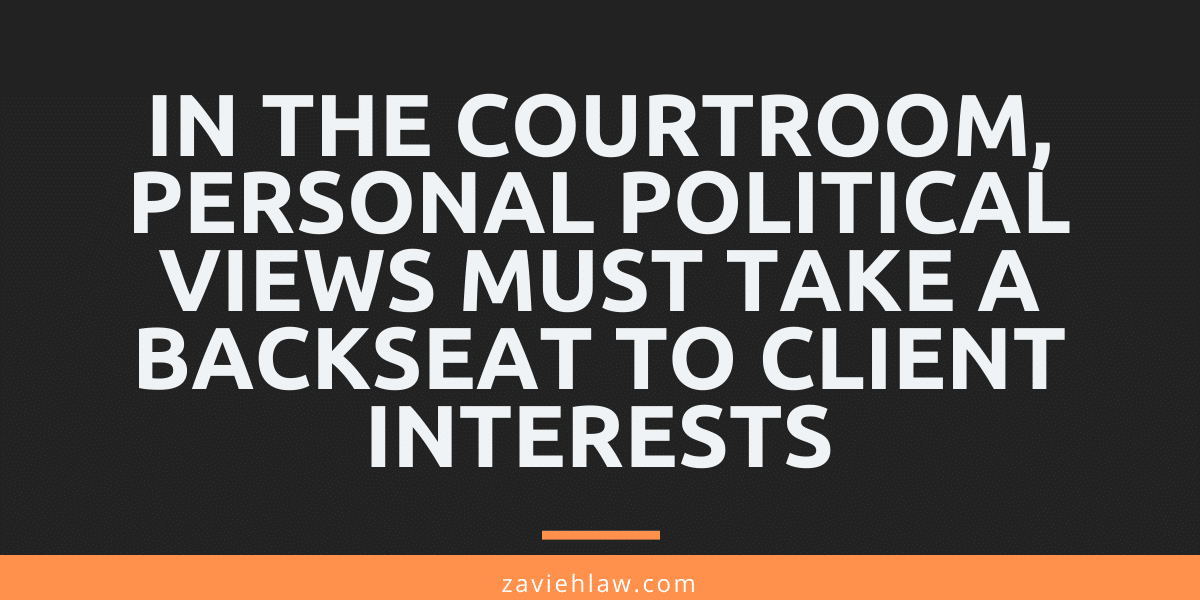 This post was written by Megan Zavieh and originally published on Lawyerist.com on September 21, 2016.

In 2016, an Ohio lawyer supporting the Black Lives Matter movement appeared in court for a client, apparently with no case link to BLM, while wearing a BLM pin. The judge took issue with the pin and asked her to remove it. When she refused, she was taken away by the bailiff, charged with contempt, and a new lawyer was appointed to handle her client’s pending matter in the courtroom.

Part of the outrage over this incident is likely related to the extreme measures to which the court was willing to go to enforce its ban of the BLM pin. If the order to remove the pin had not resulted in the attorney actually being led away into custody and her client being left in the courtroom, the incident might have gone under the radar. Eventually, the lawyer was released and simply ordered not to repeat her pin-wearing. However, by that point, the story was national news.

Related: Judges Cannot “Do Over”

This incident has sparked debate about a lawyer’s First Amendment rights in the courtroom, but it also raises the issue of how a lawyer should balance their ethical duties to a client against their rights of expression.

Do Lawyers Check Their First Amendment Rights at the Courtroom Door?

There is an unavoidable tension between a lawyer’s First Amendment rights in court versus the judge’s right to control the decorum of their courtroom. In determining that the BLM pin was inappropriate, the Ohio court relied upon a First Circuit Court of Appeals case where a judge required an attorney to remove a button advocating a particular political position on pending legislation.

The court there held that the restriction on a lawyer’s First Amendment right to free speech was reasonable:

As an officer of the court, a lawyer’s injection of private political viewpoints into the courtroom, coupled with the judge’s toleration of such conduct, necessarily tarnishes the veneer of political imperviousness that ideally should cloak a courtroom, especially when the partisan sentiments are completely unrelated to the court’s business.

The Ohio court determined that a pin supporting Black Lives Matter was political, distinguishing it from an American flag or a church pin. While there seems to be little argument that wearing an American flag in a courtroom is appropriate, some believe the church pin comparison to be less apt, asserting that a church pin is just as much a political a statement as a pin supporting Black Lives Matter.

By their nature, courtrooms demand intense concentration on important matters. Whether or not disruptive, buttons that display political messages are at the very least distracting. Lawyers who wear such emblems serve not only as vocal advocates for their clients in matters before the court, but also as active promoters of their own political agendas. If a presiding judge turns a blind eye to attorneys’ espousals of political sentiments unrelated to ongoing proceedings, clarity and continuity may well suffer. Hence, judges may take reasonable prophylactic measures to minimize such distractions.

The First Circuit’s explanation squares with the Model Rules of Professional Conduct and the overarching principle that lawyers are obligated to put their clients’ interests above their own. Where the issue is most evident is in a lawyer’s duty of loyalty to the client. Model Rule 1.7 deals with conflicts of interest, and comment 1 specifically prohibits “a lawyer’s own interests” from impacting the lawyer’s loyalty to the client.

In the Ohio case, the lawyer’s refusal to remove her pin, and even her wearing it in the first place, were to advance her own interests; they were not in any way to advance her client’s cause. In fact, her focus on her own interests led to the direct detriment of her client. He was left in the court without her representation, leading the court to appoint a new attorney, who knew nothing of the client or his case, mid-hearing.

Model Rule 3.5’s prohibition on conduct “intended to disrupt a tribunal” is also relevant here. While it could easily be argued that the wearing of the BLM pin was not designed to disrupt the tribunal, counsel’s insistence on wearing it after being ordered to remove it was a knowing disruption of the tribunal and her client’s case.

The Ohio case raises the question of what the lawyer who wears a pin to court (thinking it is permitted) should do when faced with a court order to remove it. Most obvious, a lawyer should not intentionally violate a court order. Model Rule 3.4(c) gives some wiggle room in its language that a lawyer must not “knowingly disobey an obligation under the rules of a tribunal except for an open refusal based on an assertion that no valid obligation exists.” However, not all state rules are as forgiving. In California, for example, it is an ethical violation to willfully disobey or violate “an order of the court requiring him to do or forbear an act connected with or in the course of his profession, which he ought in good faith to do or forbear,” and such violation may be grounds for disbarment.

Comment 4 to Model Rule 3.5 helps clarify where attorneys need to draw a line when faced with a conflict between their possible personal right to expression and their duties to a client:

The advocate’s function is to present evidence and argument so that the cause may be decided according to law. Refraining from abusive or obsteperous conduct is a corollary of the advocate’s right to speak on behalf of litigants. A lawyer may stand firm against abuse by a judge but should avoid reciprocation; the judge’s default is no justification for similar dereliction by an advocate. An advocate can present the cause, protect the record for subsequent review and preserve professional integrity by patient firmness no less effectively than by belligerence or theatrics.

How much more theatrical can it get than having the lawyer led away by bailiffs? Creating a spectacle on your own behalf does not advance your client’s cause. At the end of the day, whether the cause you support is a hot button political issue or a relatively innocuous one, your job as a lawyer is not to promote your own interests; it is to protect and advance the cause of your client. With that overarching theme in mind, it is not difficult to adhere to the rules of decorum.